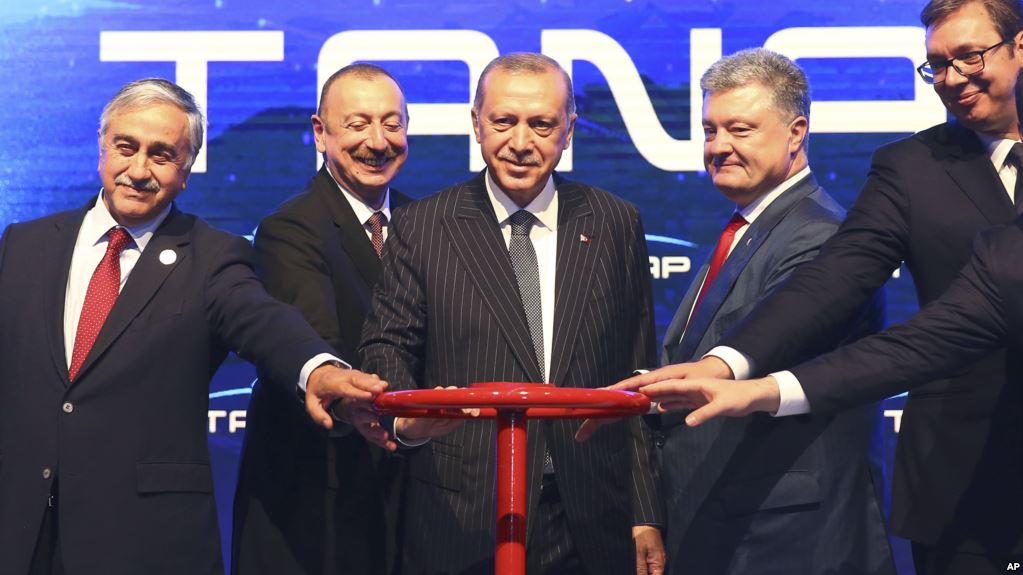 The opening ceremony of the Trans-Anatolian Natural Gas Pipeline (TANAP) 1340 km Phase-0 was held in Eskişehir's Seyidqazi district (Turkey) for the transportation of Azerbaijani gas to Turkey and from here to Europe.

Turkey's Energy and Natural Resources Minister Berat Albayrak said the trans-Anatolian Natural Gas Pipeline (TANAP), which was built for the transportation of Azerbaijani gas to Turkey and Europe, is a contribution to brotherhood: "TANAP is a reflection of active energy policies. This project is valuable from a material and moral point of view, a project of 100 years. This is also an investment in brotherhood. Two states, one nation's expression, exceeds the boundaries. TANAP is the largest legacy of the two countries to the future. TANAP will make a great contribution to energy security. "

President of Azerbaijan Ilham Aliyev said that the launch of TANAP today is another manifestation of the Turkish-Azerbaijani brotherhood: "TANAP is the next victory of the Turkish-Azerbaijani brotherhood. If this brotherhood did not exist, the project would be on paper. This project is a historical project. Our joint energy projects bring stability to our region and benefit peoples. Trans-Anatolian Natural Gas Pipeline (TANAP), which was built for the transportation of Azerbaijani gas to Turkey and from here to Europe, is an indispensable infrastructure for the solution of energy issues. TANAP is an integral part of the giant Southern Gas Corridor project. Two weeks ago, the opening of the Southern Gas Corridor was carried out. The Southern Gas Corridor consists of four projects: Shah Deniz-2, South Caucasus Pipeline Expansion, TANAP and TAP. Three of the four projects have been completed. The TAP's execution rate is 72%. I believe that the TAP will end in two. Thus, Europe's largest infrastructure project will be implemented. This historic achievement will allow Azerbaijan to be safely transported to Europe through a short and easy way. "

The President of the Turkish Republic of Northern Cyprus Mustafa Akıncı said that TANAP is a project of great potential and potential for Turkey and the countries of the region: "I wish this wonderful event to be beneficial to Turkey and Azerbaijan and to all humanity." Turkey's geographical position is that it transports rich resources of the East making it an ideal energy center that has transformed into a collaboration line of humanity. "

Serbian President Alexander Vuchecić stressed that TANAP is an important project: "By launching this pipeline, we have taken a very important step in South East Europe, Serbia is a country that is eager to join such projects, and TANAP will make a great contribution to the economy of all the countries of the region "

Ukrainian President Petro Poroshenko said the launch of the Trans Anatolian Natural Gas Pipeline (TANAP) project is an important point for Azerbaijan, Turkey, the European Union and Ukraine: "This project, which is an important part of the Southern Gas Corridor, was implemented by combining the efforts of two major leaders - President of Turkey Recep Tayyip Erdogan and President of Azerbaijan Ilham Aliyev, thus ensuring the energy security of the European Union. It is also important for the diversification of Ukraine's energy carriers. Ukraine fully supports this project. Our country will take steps to benefit from this project "

Turkish President Recep Tayyip Erdogan said today that a historic step is being taken for the region and the country: We are launching a project known as the Energy Silk Road. Implementation of this project has been possible thanks to the strong relationship existing between Turkey and Azerbaijan, as well as between companies: "I congratulate those who have contributed to the implementation of this gigantic project before the planned date. I thank President Ilham Aliyev for his leadership"

The initial capacity of the pipeline is 16 billion cubic meters a year. cubic meters. The volume of this volume is $ 6 billion. cubic meter to Turkey and 10 billion cubic meters to Turkey. cubic meters will be transported to Europe. The TANAP pipeline will have two access points in Turkey, Eskisehir and Thrace. BOTAS will sell gas in Turkey. The total length of the pipeline is 1,850 km. The diameter of the Georgian-Turkish border-Eskişehir section of the pipeline called "Phase-0" is 56 inches and its length is 1340 km. Gas will be supplied to Turkey from the point of origin. The diameter of the Phase-1 section (from Eskisehir to Europe), which will be supplied to Europe, is 48 inches long and 476 km in length. "Phase-1" will be ready to accept gas for Europe at the end of 2019. TANAP passes through 20 cities and 67 districts of Turkey, including Erdahan, Kars, Erzurum, Erzincan, Bayburt, Gümüşhane, Giresun, Sivas, Yozgat, Kırşehir, Kırıkkale, Ankara, Eskişehir, Bilecik, Kütahya, Bursa, Balikesir, Çanakkale, Tekirdağ and Edirne. Ends in the Ipsala district of Edirne on the Greek border. This line is the largest and longest pipeline that has ever been built in Turkey.